Ramanujan Society of Mathematics and Mathematical Sciences is going to organise a National Conference on “Mathematical and Computational Analysis,” during January 28 – 30, 2023.

The Conference is to bring together eminent Mathematicians, research scholar and students from different parts of the Country. In these three days National Conference young mathematicians and research scholars will be benefitted by getting ideas of the recent development in Mathematical and Computer Analysis through invited talks/plenary lectures of the senior and eminent mathematicians. The programme covers broad spectrum of topics to the several applications of mathematics in different field of subjects. It also provides a premier interdisciplinary platform for researchers, practitioners, and educators to present and discuss the most recent innovations, trends, and concerns as well as practical challenges encountered and solutions adopted in the fields of Mathematical and Computer Analysis Conference.

Theme of the Conference

The name "mathematical analysis" is a short version of the old name of this part of mathematics, "infinitesimal analysis"; the latter more fully describes the content, but even it is an abbreviation (the name "analysis by means of infinitesimals" would characterize the subject more precisely) Analysis is the branch of mathematics dealing with limits and related theories, such as differentiation, integration, measure, infinite series, and analytic functions. These theories are usually studied in the context of real and complex numbers and functions. Mathematical analysis is of high importance to the mathematical sciences as a whole, linking many areas of pure mathematics to applied areas. For example, there are strong interactions with: algebra. applied mathematics. An analysis is important because it organizes and interprets data, then structures that data into presentable information useful for real-world applications. For example, a marketing analysis interprets buying patterns, market size, demographics and other variables to develop a specific marketing plan. Analysis is a branch of mathematics that depends upon the concepts of limits and convergence. It studies closely related topics such as continuity, integration, differentiability and transcendental functions. These topics are often studied in the context of real numbers, complex numbers, and their functions. In the 18th century, Euler introduced the notion of mathematical function.  Real analysis began to emerge as an independent subject when Bernard Bolzano introduced the modern definition of continuity in 1816, but Bolzano's work did not become widely known until the 1870s. In 1821, Cauchy began to put calculus on a firm logical foundation by rejecting the principle of the generality of algebra widely used in earlier work, particularly by Euler. Instead, Cauchy formulated calculus in terms of geometric ideas and infinitesimals. Thus, his definition of continuity required an infinitesimal change in x to correspond to an infinitesimal change in y. He also introduced the concept of the Cauchy sequence, and started the formal theory of complex analysis. Poisson, Liouville, Fourier and others studied partial differential equations and harmonic analysis. The contributions of these mathematicians and others, such as Weierstrass, developed the (ε, δ)-definition of limit approach, thus founding the modern field of mathematical analysis. Around the same time, Riemann introduced his theory of integration, and made significant advances in complex analysis.

Towards the end of the 19th century, mathematicians started worrying that they were assuming the existence of a continuum of real numbers without proof. Dedekind then constructed the real numbers by Dedekind cuts, in which irrational numbers are formally defined, which serve to fill the "gaps" between rational numbers, thereby creating a complete set: the continuum of real numbers, which had already been developed by Simon Stevin in terms of decimal expansions. Around that time, the attempts to refine the theorems of Riemann integration led to the study of the "size" of the set of discontinuities of real functions.

Also, various pathological objects, (such as nowhere continuous functions, continuous but nowhere differentiable functions, and space-filling curves), commonly known as "monsters", began to be investigated. In this context, Jordan developed his theory of measure, Cantor developed what is now called naive set theory, and Baire proved the Baire category theorem. In the early 20th century, calculus was formalized using an axiomatic set theory. Lebesgue greatly improved measure theory, and introduced his own theory of integration, now known as Lebesgue integration, which proved to be a big improvement over Riemann's. Hilbert introduced Hilbert spaces to solve integral equations. The idea of normed vector space was in the air, and in the 1920s Banach created functional analysis.

Classical analysis would normally be understood as any work not using functional analysis techniques, and is sometimes also called hard analysis; it also naturally refers to the more traditional topics. The study of differential equations is now shared with other fields such as dynamical systems, though the overlap with 'straight' analysis is large.

Math matters for computer science because it teaches students how to use abstract language, work with algorithms, self-analyze their computational thinking, and accurately modeling real-world solutions. In view of this, computer science fundamentals and path-breaking research in conceptual computer science and engineering will also be one of the facets of interest for this conference. Some of the upcoming areas of research like computational intelligence, big data analytics and deep learning, in addition to several others, will be the prime focus of the conference, with specific attention being paid to scope for future research in these fields. This conference will give academia and industry professionals a platform to share their experiences, research results and challenges faced, paving way for the development and evolution of state-of-the-art technologies.

Aim of the Conference and Targeted Audience

This conference aims to bring together researcher, academicians, scholars and students to exchange & share their experiences, new ideas and researches about all aspects of Mathematics research in diverse fields. This conference is going to benefit directly to 150 academicians who will attend this conference and indirectly too many people though social media (Advertisement, News papers, Social Sites, proceedings etc.).

About Ramanujan Society of Mathematics and Mathematical Sciences:

India celebrated the “Mathematics Year” in 2012 and Ramanujan Society of Mathematics and Mathematical Sciences (RSMAMS) was established in the same year. The main aim of the society is the promotion of Mathematics Educations and its applications in different field of Sciences and also to create interest among students, research scholars and young teachers towards mathematics. Since its foundation in 2012 “RSMAMS” has done excellent work to improve mathematics Educations and research in India. In 2012, 2013, 2014, 2015, 2016,2017, 2018, 2019, 2020, 2021, and 2022 “RSMAMS” has organized symposiums, conferences, and workshops successfully to achieve its goal. The society is continuously organizing lectures of eminent Mathematicians for students and research scholars. During this short tenure the name and fame of the society has spread across the frontiers of the country and also in abroad.

The organizers of the Conference invite papers for presentation. The abstract not exceeding 200 words intended for presentation should be sent latest by January 20, 2023 preferable by e- mail to

Proceeding of the Conference:

The proceedings of the Conference will be published. The full length paper in duplicate along with a file formatted in AMS latex/  MS word/ Pdf may be submitted during the Conference by January 20, 2023.

Financial support for travel (AC III class fare) will be provided to invited speakers. Teachers/Research Scholars presenting paper in the Conference will be given  fare. Each participant and accompanying person will be provided local hospitalities. Please inform will in advance about your travel programme to facilitate the organising committee and volunteers. 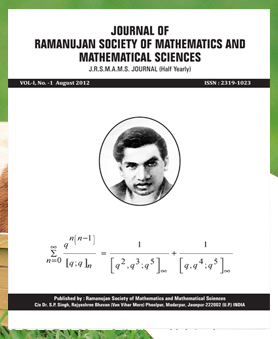